~Loren and Maggie by the ‘bigger’ potato bed behind the garage~

I started growing potatoes when my children were small. It was out of my deep admiration, even hero worship, for my Grandmother, who was (and is ever) my dearest beloved grown-up. I wanted to be just like her.

Grandma told me she grew potatoes when her children were small.  She was glad she did. Often, that was all they had to eat, with some lard gravy, back in the 1930’s and 40’s.

I started out with a tiny raised bed where I grew about ten Red Norland potato plants. After the first meal of fresh potatoes I served my family, which included my father-in-law, Quincy, there was no going back to store bought potatoes.

Many a breakfast was hash brown potatoes, eggs, sausage and toast with homemade jelly. My youngest son, Loren, sat on Grandpa’s lap. Loren and Quince ate their meals together.

“Now, Hon,” Grandpa would say, “be sure and get you some of that jelly on your sausage. It’s mighty good.”

“O.k., Quince,” Loren answered. “What’s Benweiner eating?” he asked about his older brother, with a giggle.

“Don’t worry about old Benweiner. We have all the good stuff right here,” he laughed.

“We have all the good stuff, huh Quince?”

( I have to say, Ben didn’t like to be called Benweiner, but he put up with it like a champ.)

My husband took over the management of potato growing. He decided we needed a bigger supply of fresh potatoes. Each year the potato plot has gotten bigger. Many varieties of potato have been sampled and tried. My husband, Lynn, goes to great lengths to assure those lovely meals, which include fresh potatoes, are possible.

~ Me in the potatoes a few years ago~

We do enjoy purple varieties for their high bioflavonoid content.  Yellow Yukon Gold is reliable and has a smooth texture. Lately, our favorite is Purple Viking, which has striking purple and red skin, like a fancy marble, and creamy white flesh with the most amazing flavor we’ve ever had from a potato.

This year, seed potatoes were slow to arrive at the local nursery. We had a bit of a panic about whether we would be able to grow Purple Viking this season. Finally, the nursery let us know our potatoes had arrived. 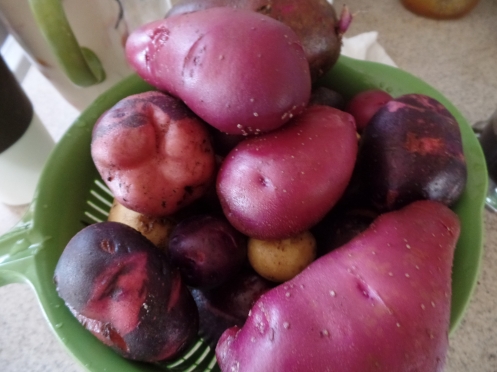 A big preparation of potato beds is on going in the garden. The chickens have had all of February and March to eat bugs and weed seeds. Several bales of Peat Moss have been incorporated into our alkaline soil. The seed potatoes are cut and drying and will be ready to plant next weekend.

And so begins the anticipation of hash browns, cowboy fries, scalloped potatoes, potato salad on the Fourth of July, potato soup and warm winter stews.

The lowly potato has been trashed by many of the modern nutritionists, who claim they are unhealthy to eat. They should be more specific about the preparation methods and only affirm that greasy french fries, potato chips and baked potatoes drenched in butter, sour cream and cheese are unhealthy.

Fresh potatoes are lovely and health smart. One potato has 32% of the vitamin B6 essential daily, for brain cell and nervous system activity, and for growing new cells. It promotes cardiovascular protection and helps break down glycogen, which helps with athletic performance and endurance.

A recipe for you, from me:

Growing potatoes is a learning process, well worth the effort. They are actually less needy than other garden vegetables. They have pretty flowers just before they are ready to harvest. The delicious meals are satisfying and often better than you can get at a restaurant.

A small warning: sharing with neighbors leads to inquiries as to when you will grow more, or how to grow potatoes themselves.